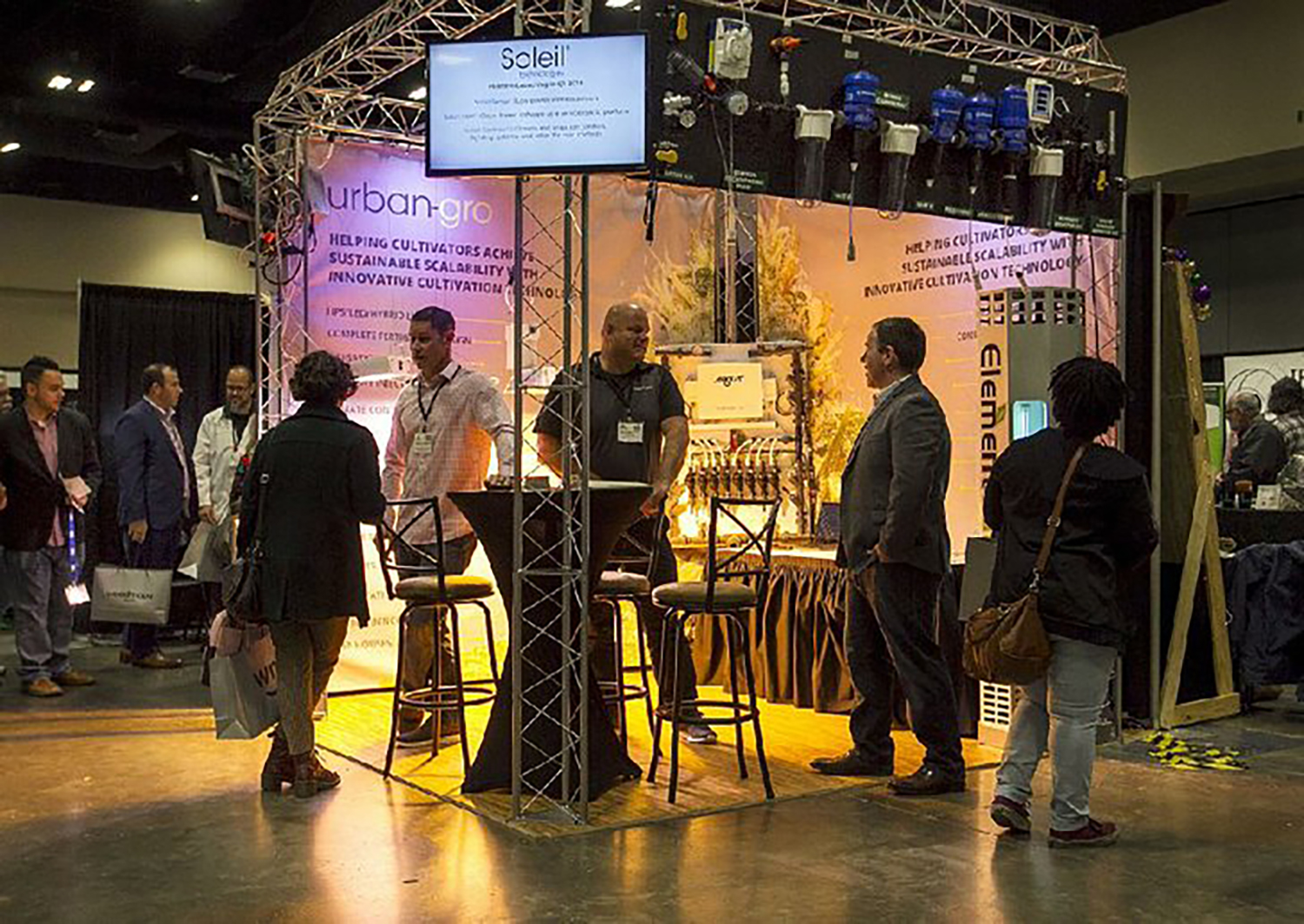 Two tables of bongs, pipes and other marijuana paraphernalia drew a steady line of curious consumers Wednesday morning at the Statehouse Convention Center in Little Rock.

“Do you smoke marijuana? What’s your favorite way to smoke it?” Marc Wein of Mama P’s Wholesome Grinding Co. in Spicewood, Texas, asked nearly every person filing by his booth during the opening hours of Arkansas’ first convention dedicated to medical marijuana.

“We’re a 12-time winner of High Times‘ Cannabis Cup for smoking accessories and the only truly American-made accessory manufacturer in the U.S.,” the tie-dye-wearing Wein added in a rapid-fire burst of words.

Across the convention hall, representatives of Edibles magazine touted the publication along with an assortment of cannabis-related gummy rings and trail mix while two Conway men nearby solicited members for their newly formed Arkansas Hemp Association.

Those vendors joined about four dozen others as part of the Ark-La-Tex Cannabis Business Expo. The Arkansas Cannabis Industry Association is sponsoring the two-day event to bring businesses and potential consumers together as the state edges closer to implementing a medical-marijuana program approved by voters in November 2016.

Under the Arkansas Medical Marijuana Amendment, the state will license 32 dispensaries and five cultivation facilities. The five cultivators — out of 95 applicants — will be announced Feb. 27. The state received 227 applications for the dispensaries, and the winners of those licenses likely won’t be announced until late April.

Some two dozen speakers were lined up by the event’s organizer, Imperious Expo of Tyler, Texas, to speak individually or as part of guest panels on such topics as high-tech security for cultivators and dispensaries; marketing; cannabis research, and the latest on federal laws’ clash with the 29 states that have approved medical marijuana, recreational marijuana or both.

The convention ends today about 5 p.m.

Back at Mama P’s, Jody Hardin of Hardin Farms in Lincoln County, stepped up to make a purchase but lamented that he lacked $25 in cash.

Hardin said he will be the “head grower” for Clinice, a Fayetteville consortium of investors, if the group’s application for a cultivation facility is approved.

Hardin said he’s always been a supporter of the “freedom to farm,” including marijuana and anything else a farmer wants to grow. “This is a special issue to me, to farm and to help people who are helped by medical marijuana,” Hardin said.

“I don’t want to see corporate giants getting a monopoly [on cultivation],” he said, while acknowledging that his group has some fairly deep pockets, too.

A few booths down, Kyle Felling of Greenbrier touted his company, F.A.S.T. Laboratories/Research, as way to help assure medical-marijuana patients they’re getting the quality they paid for.

To gear up for the nascent medical-marijuana trade in Arkansas, Felling said, he recently made trips to several “head shops” in central Arkansas, buying up various cannabis-based ointments and oils. Back at his Greenbrier lab, he tested whether the products’ labels matched up with their actual levels of tetrahydrocannabinol (THC), the cannabis compound that provides the “high” within marijuana, or cannabidiol (CBD), a compound with medicinal effects without the physical effects.

“I just wanted to hash our process and get prepared for what’s coming in the next few months,” Felling said, adding he’s hoping to win contracts with growers for his tests of their plants.

Of about 50 tests, he found eight products that had no cannabidiol at all. “People were paying up to $50 for small bottles of vegetable oil, pretty much,” Felling said. Several others fell short by 25 percent to 50 percent.

He informed the retail outlets of his test results by email. Some didn’t respond. “Some were genuinely concerned that they weren’t getting a good product,” he said.

Around the corner, Jon Workman of England, in Lonoke County, was manning a booth for American Cannabis Co., a consulting firm in Denver founded by a high school classmate. The company will have an office in Arkansas.

Workman, 54, was diagnosed with multiple myeloma, and doctors gave him three years to live. That was 19 years ago.

While marijuana didn’t exactly save his life, it made him less nauseated and gave him an appetite. Now, medical marijuana has given Workman, who until last year worked at the all-but-closed Southwind Milling Co. in Pine Bluff, a second career as well.

“I’m looking around here, thinking is this really legal?” Workman said, gesturing with a smile at nearby booths with signs like Weed Management, Ounce magazine and The Cannabis Marketing Lab. “And I know that it’s not just legal, but it’s really going to help people. It’s a life-changing event.”