Bill Essert hasn’t lived in Arkansas in years. He’s a businessman for an agriculture technology company in Cotati, California — BioTherm.

His parents still do, though. Live in Arkansas, that is — Conway.

It’s not Christmas or Thanksgiving but the Ark-La-Tex Cannabis Business Expo that’s brought this son of Arkansas back. The two-day trade show for the marijuana industry called forward scientists (both horticultural and chemical), food makers, marketers, engineers and security personnel.

Marine sergeants Ryan Hansen and Jonathan Reeves started Liberty Defense Group, LLC, in Fayetteville earlier this year just to get in on the fresh market.

“We both have backgrounds from the military, both marines, have seven deployments to Iraq and Afghanistan between the two of us,” Hansen says.

“We saw an opportunity in this new fledgling business to start a security company and reintroduce vets from the war back, kind of a transition, back into the civilian world. So, we’re not only trying to start a business in the cannabis industry but also gearing it toward veterans: veteran owned, veteran staffed.”

Nearby is a sales representative in a lab coat, Derek Selvidge of Searcy.

“Shimadzu, we are a scientific instrumentation company that tests to make sure the product is safe. So, like, your pesticides, your potency, heavy metals, residual solvents — all those things required by the state of Arkansas, our instrumentation will test for them.”

Then there’s Lisa High who legally changed her last name to more completely transition to the nom de guerre, Green Life Granny. She’s an activist who, along with her partner James Priest, want to start a YouTube medical cannabis talk show called The High Priest. 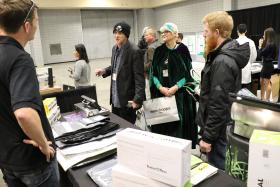 “I’m here to take the scary out of the Mary, for people my age especially,” she says.

High lives in Pittsburgh, Kansas, but maintains a residence in Colorado expressly to acquire legal cannabis. As soon as the state of Arkansas rolls out its medical marijuana program she’s going to move to Benton County because the distance between Pittsburgh and Bella Vista is but 80 miles.

“Us grandmas and grandpas, we’re going to be the change-makers in this movement because it’s time.”

The expo was sponsored by Weedmaps, an online and mobile platform service (not unlike the Starbucks locator app) that shows users where the nearest marijuana dispensary is located. 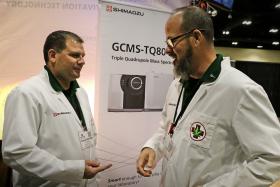 Asked about the difference in cultures, Essert, with California-based BioTherm, says Arkansas is slower to change. “Holder-ons,” he calls folks here, “of the old-school way of thinking,” but farming is such a large part of the marijuana industry “I think it won’t take a whole lot of development of the ag mentality to help them grow cannabis. It’s a weed after all.”

Selvidge of Searcy says, old school or not, Arkansas is showing amazing foresight on marijuana.

“We’re like the leaders in the South! We’re not the ones who came on later,” he says. “Usually, I mean, I live here, I live in Searcy, I’m from Arkansas. I love this state. But usually Texas wins, you know?”

This story is produced by Arkansas Public Media. What’s that? APM is a nonprofit journalism project for all of Arkansas and a collaboration among public media in the state. We’re funded in part through a grant from the Corporation for Public Broadcasting, with the support of partner stations KUAR, KUAF, KASU and KTXK. And, we hope, from you! You can learn more and support Arkansas Public Media’s reporting at arkansaspublicmedia.org. Arkansas Public Media is Natural State news with context.