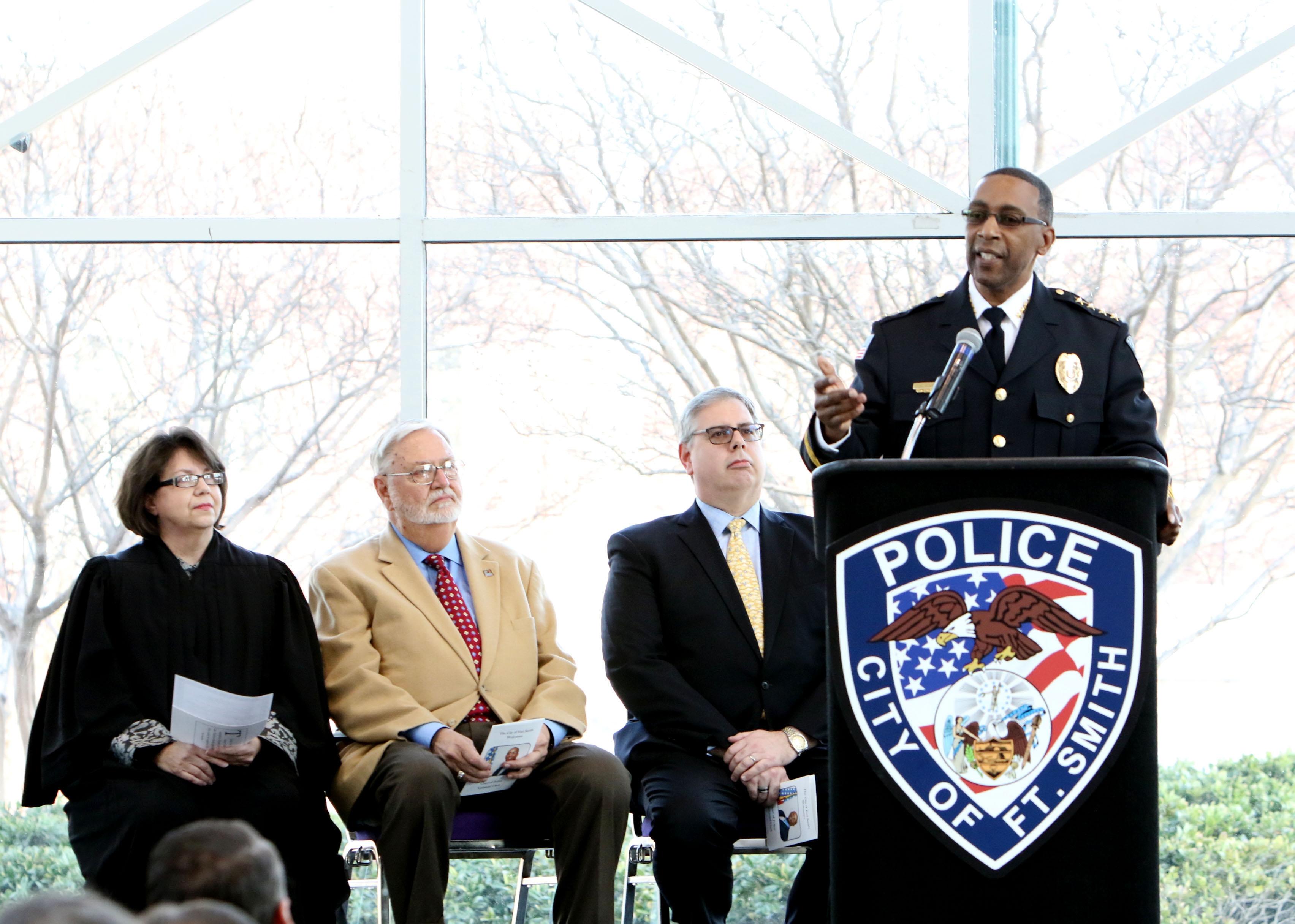 Read the full article at the Times Record website.

The monthly community roundtable, Coffee with the Chief, was held at Calico County, 2401 S. 56th St., Thursday morning, and this month’s discussion centered on medical marijuana coming into the area and rumors about the Civil Service Commission.

“We’re planning on applying for a cultivation facility in Fort Smith, so we wanted to work with the police,” said local resident Storm Nolan.

“We want to make sure it’s more of a partnership, not a problem, and we can work together so marijuana doesn’t end up in the hands of kids or people who don’t have patient cards,” said Nolan’s stepbrother and future business partner, Kane Whitt. “We want to have a very cooperative relationship with the police regarding this.”

Both Nolan and Whitt said that Fort Smith police chief Nathaniel Clark was very receptive to what they had to say, and they were surprised that there wasn’t more resistance to their business venture. According to them, Clark stated that the public and the police are a family.

“I’ve been quite shocked by how receptive people have been,” said Nolan. “I think everyone has a story about how their lives have been affected by opioid addiction, whether it’s a family member or a friend or themselves.”

Opioid addiction is precisely why Nolan and Whitt want to bring cannabis cultivation here. They said that their mother was a prominent lawyer before her opioid addiction brought her down to bankruptcy and then death.

“PTSD, cancer patients, people with glaucoma,” Nolan added. “There are all kinds of people who could have benefited from this medicine, and instead, they had to turn to opioids.”

According to the Centers for Disease Control (CDC), in the United States in 2015, there were roughly 30,000 opioid-related deaths. An estimated 15,000 of them were from prescription medication, an estimated 13,000 from heroin and another 2,000 from other sources or causes.

“She was the youngest graduate of the University of Arkansas law school, super smart lady,” said Nolan of their mother. “Her doctor prescribed her opiates over 20 years ago because of some chronic pain she had, and it was just a steady downhill slope from there.”

Both the National Institute on Drug Abuse (NIDA) and the FDA have stated that cannabis doesn’t meet their criteria for medical use due to a ”…lack of evidence regarding safety and the high risk of abuse”, citing not enough large-scale clinical trials that show the benefits of the marijuana plant — as opposed to its cannabinoid ingredients — outweigh the risks.

“It’s about as addictive as coffee, so there’s not as much of a risk of dependency,” said Nolan.

Either way, the conversation was a productive one for the stepbrothers, and they were impressed with Clark.

“I feel he was very receptive,” added Whitt. “We talked about maybe even some training opportunities that could be had.”

But not everyone was there to talk about medical marijuana. Local resident Mike McEvoy came to clear up the rumors he’d heard about the Civil Service Commission.

“He laid to rest some of the myths about that,” said McEvoy, who’s lived in the area for 37 years. “The rumor had been that the chief was trying to eliminate the Civil Service Commission, and the truth is that he is not.”

McEvoy said his main concern was for the future of patrol officers.

“If they eliminated the commission, I couldn’t see where individual patrolmen would have any recourse if they were disciplined in any way,” added McEvoy. “That’s been put to rest.”

And Roy Rhodes, a cousin to the auto dealership family, said it was his first time meeting Clark.

“I’m just here to meet the chief,” said Rhodes as he sipped his coffee. “I used to know all the police chiefs. Carl Byers, Bill Young, all of them.”